Singapore Sports Hub celebrates its first year of operations with a two-month Opening Season of events for the community. Starting with the SEA Games in early June 2015, and culminating in Youth Celebrate!, on 26 July 2015. UnUsUaL Group Of Companies is honoured to be part of this celebration, where we were involved in both events in different ways.

The Singapore Sports Hub was bustled with activities as Singaporeans and athletes thronged the 28thSEA Games 2015 Carnival, which was filled with fascinating booths and entertaining performances, between 30 May and 16 June 2015.

Boasting up to 20 booths and stations ranging from typical carnival activities and colourful inflatable for the toddlers and children to adventure sports try-outs for teenagers. The Carnival highlights include the first ever Hot Air Balloon rides, Laser-Tag battles and the gravity defying “Walk-On-Water” at the Sports Hub.

Carnival-goers get to pit their wits and skills in a variety of sports and games, but with an interesting twist, such as:

The Junior Zone consists of the following:

Athletes’ meet-and-greet sessions were also planned following medal wins, for public to obtain their autographs and photo-taking session. The entire Carnival was part of the several fringe activities organized by SportSG, which was available for the public and was aimed to rally communities to get involved in the SEA Games experience.

For many months UnUsUaL together with SportSG, worked hard to stitch up all the programs within the Carnival. We aimed to introduce SEA Games sports to the children in distinctive and appealing ways and to create a “June Holiday like no others!” for all that visited the Carnival.

Our team started from brain-storming ideas for the Carnival, to conceptualizing, designing and executing it. It was a long process but all was worthwhile after the whole Carnival had been setup. From carnival crews to performers and technical crews, we have an average of 120pax working onsite every day.

Carnival is never our forte but our team did a great job putting everything together and at the end of it, we received tremendous praises from the organizing committee and they were more than satisfied with the turnout. Public responded well to the Carnival and it hit a record high of 40,000pax visitor-ship per day throughout the 16-days Carnival.

What made this SEA Games Carnival stand out from the typical carnivals that anyone has probably attended before are the stage programs we have put up over the few weekends. SportSG invited local artistes like Daphne Khoo, Tabitha Nauser, The Sam Willows, Tay Kewei and Charlie Lim to perform on stage. We also featured a specially choreographed Laser & Lightshow for everyone to celebrate, as well as a dance and percussion performance incorporated with our Laser & Lightshow to keep the public entertained.

We had a stage size W10 x D7.2m with a M3 Pitch 10 LED Screen of W5 x H3m seated on it and a rooftop structure built over the stage. Another set of M3 LED Screen of W10 x H1m was tied to the stage front, acting as the stage skirting for graphic effects and announcement playback.

A range of lighting fixtures, up to 400pcs were hung on the trusses within the stage and spread along the lighting trusses, which were planted around the Carnival ground to create the right ambience. These fixtures include, Robe Robin 300 Beam, M3 LED Moving Head, M3 15R Beam, M3 RGBW LED Par, M3 3-Cell LED Blinder, M3 LED Wash Bar 324 and 8 units of M3 M6-G6000 Green Laser. Most of them were LED fixtures as power supply was a major challenge for us where we had to bring in close to ten generators of different rating to cater for the Carnival’s requirement.

UnUsUaL was once known to have the largest Electro-Voice inventory in Asia and all our crews are most familiar with the EV systems. A total of 16 units of EV XLD Line Array Speakers, complemented by 6 units of EV X-Sub Woofers, driven by 10 units of EV P3000 Power Amplifiers were deployed onsite. It was supported by three sets of PA Racks with 12 units of Nexo PS15 Speakers at the Junior Zone, Walk-on-Water and Laser Tag stations to further create the loudness in the Carnival ground with DJ spinning and background music playback.

Youth Celebrate!, one of the largest events to showcase the vitality of youths and their achievements in sports, arts and uniformed groups. Held on 26 July 2015 (Sunday) at the Singapore Sports Hub, the event featured more than 3,700 performers and athletes from all MOE schools, as well as Special Education schools and Institutes of Higher Learning. This is the first time that our new National Stadium is hosting a joint sports and arts event for over 53,000 students, educators and parents. At this milestone occasion, it also marks the official opening of the Singapore Sports Hub by Prime Minister Lee Hsien Loong.

UnUsUaL plays a key role in the project organization and management of special events. Kicking off with breaking two records on the Singapore Book of Records – first ever largest floating Singapore flag in history and 7,500 laps swum in an hour at OCBC Aquatic Centre, followed by highlight performances at the National Stadium. With two celebratory events happening at different venues, UnUsUaL dedicated whole time of detailed and systematic planning. Starting off from planning back-of-house detailed logistics, including signages and communication equipment, to assisting and coordinating with teachers to ensure the most positive outcome of the event.

A visual feast of perfectly-synchronized performances enhanced by 18 sets of high power laser system with green stunning laser launcher, splendid pyrotechnics and 120 sets of confetti shower launcher wowed the whole stadium crowd tremendously. Furthermore, the crowd has also participated in one of the light sticks segment which UnUsUaL has specially coordinated and remote controlled the light sticks, surprised and fascinated the crowd. It also marks the first ever spectacular light sticks show in history.

A grand scale of lighting fixtures, more than 900 units were hung on the trusses and fixed around the pitch to light up the whole roaring stadium and atmosphere.

A total of 40 pieces of M3 Pitch 10 SMD LED Panels were used to clad onto four sets of mini stages of 5m by 1m each, acting as stage skirting for graphic effects.

These celebratory events would not be successful without UnUsUaL’s great team of crews and specialists, which led by our in-house Project Directors and assistance from the Organizers and Committee. 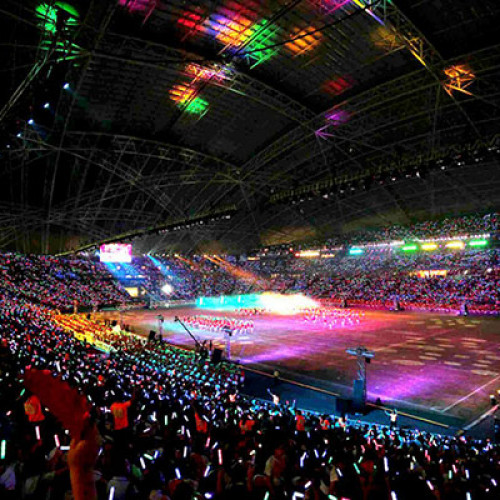 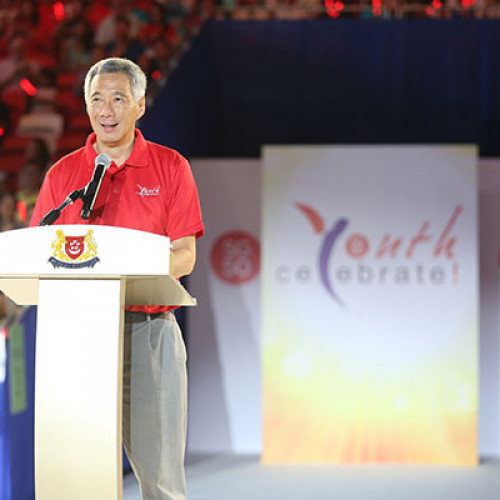 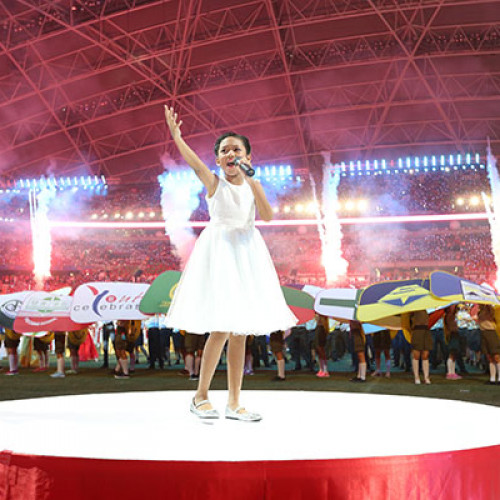 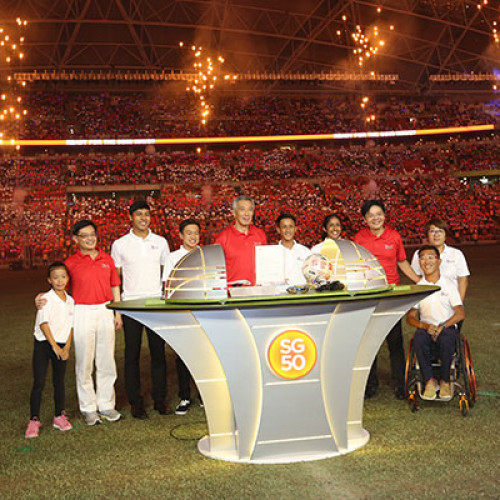 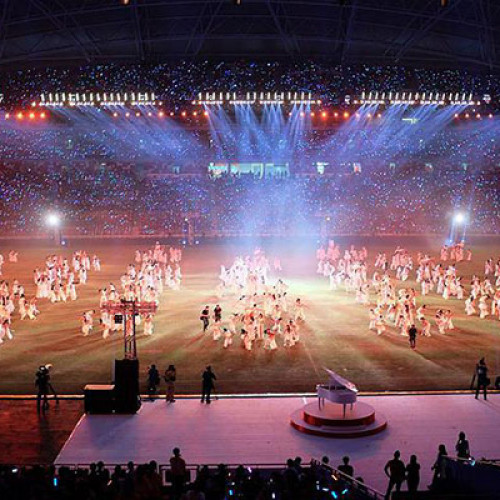 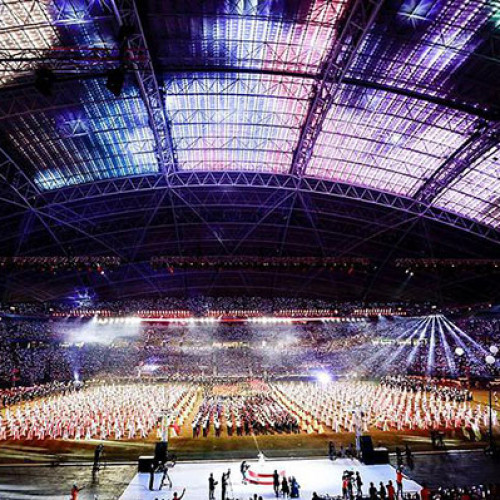 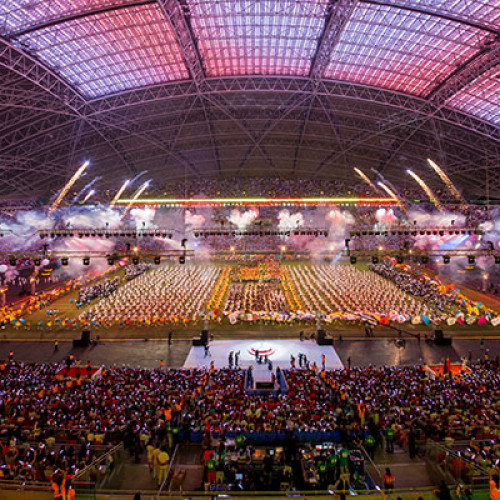 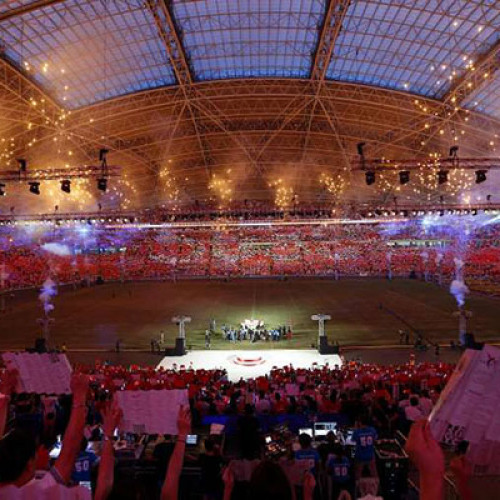